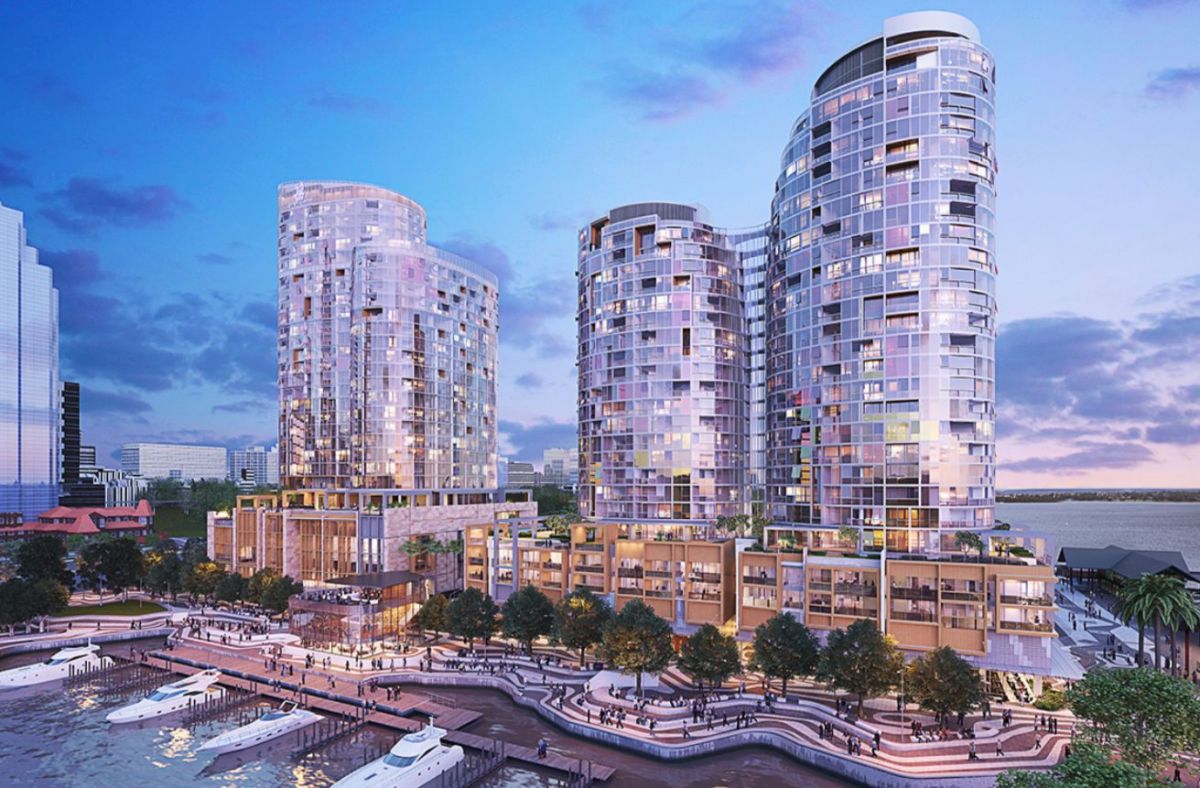 Ritz-Carlton’s 100th hotel has just opened at Elizabeth Quay in Perth. Designed by Cottee Parker architecture firm and developed by Far East Consortium, the 204-room hotel will be part of a mixed-use waterfront precinct at Elizabeth Quay.

‘The Towers’ project will include 379 apartments across two ‘cousin-like’ towers, along with ground floor retail, food & beverage options, and hotel facilities.

Elizabeth Quay seeks to connect the riverfront with the city, creating a new welcome to the city and a new destination for tourism and entertainment. The project intends to transform the previously underutilised area into a vibrant mix of commercial, hospitality and residential uses. The variety of quayside dining options will draw locals and visitors alike, activating the area. The hotel, with its long operation hours, will further activate the area, while the strong international brand Ritz-Carlton brings will elevate Perth on the world map.

“Visitors to The Ritz Carlton will be met with a uniquely Australian hotel offering, but also a specifically West Australian hotel that lives up to their expectation of a desert continent [and] educates them in the many faces of Australia and the Perth locale,” Cottee Parker firm said.

The riverfront site has a historical significance, being the home of the Wadjuk people of the Noongar nation before being transformed by colonial settlement and used as a delivery port, then as a public entertainment place for the gold rush population boom. The design of ‘The Towers’ respects the site’s Aboriginal and colonial history, taking inspiration from nature.

Throughout the design process, nature has informed the design of ‘The Towers’ and Ritz-Carlton. ‘The Towers’ draws inspiration from bees’ honeycomb, with each apartment or guest room being a cell of the honeycomb, expressed or veiled through the glass façade. 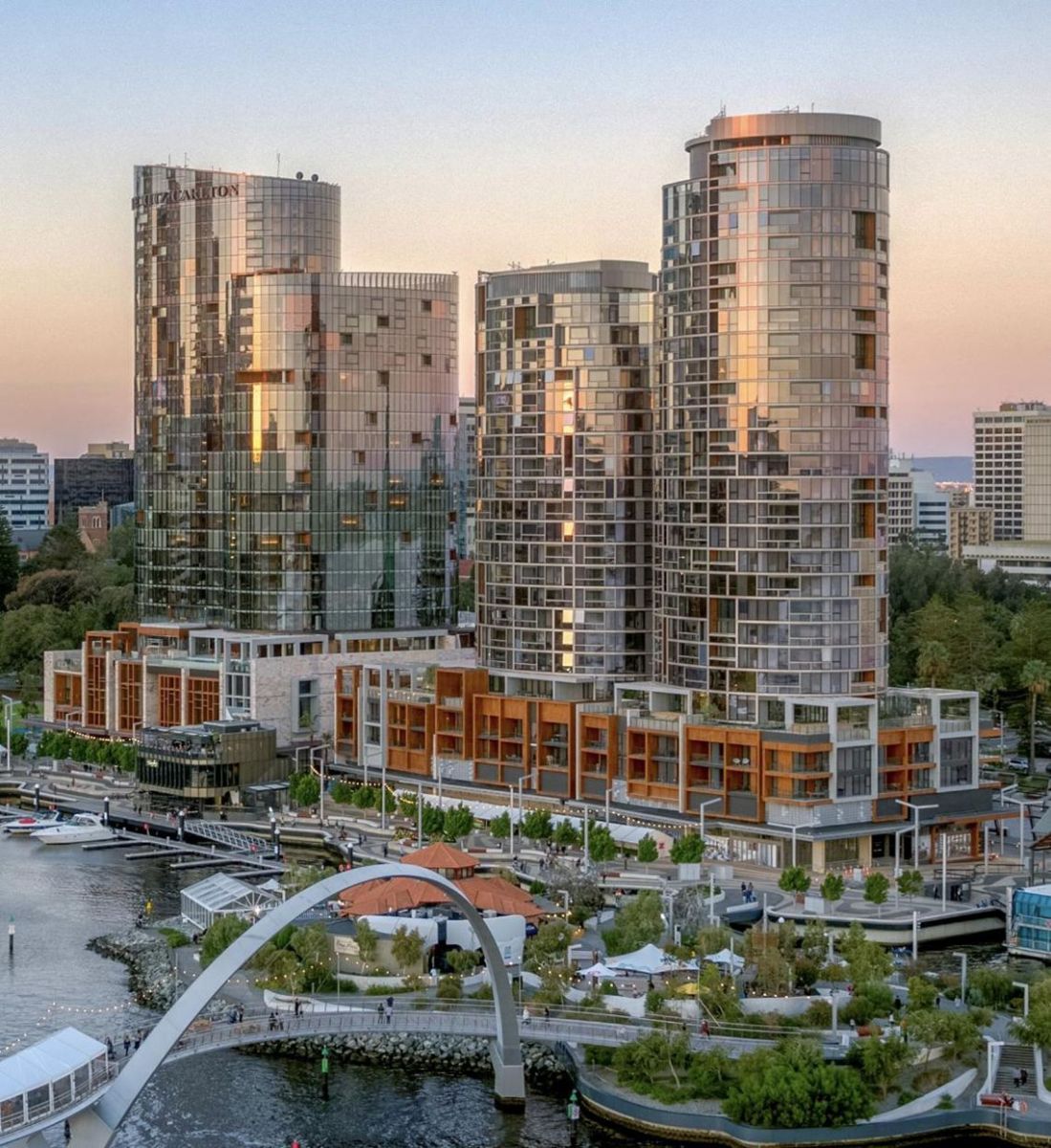 Image: The warm pink highlights on the façade of the towers draw parallels with the red hues of sunsets. (Image: Steven Fenwick via Cottee Parker)

Reflecting Perth’s status as the windiest city in Australia, and the third windiest city in the world, the curved forms of ‘The Towers’ have been envisioned to be eroded by wind and rain. The design of the podium also responds to this theme, with the podium’s materiality combining stone and timber – stone elements “resist” the effects of the metaphorical wind and rain, while softer timber elements become “frayed” and make up the lighter components such as sunscreens and pergolas.

The rose colours with reflective gold and pink highlights of the façade are reminiscent of the red hues of sunsets over water. The colour scheme can also be found in other elements of the Western Australia environment, such as the Argyle diamonds of the Kimberly and the rust stained irrigated footpaths. The façade treatment also allows ‘The Towers’ to be a sublime addition to the Perth skyline.

Ritz-Carlton Perth will offer expansive views of the Swan River and the Perth skyline. Hotel facilities include an outdoor heated infinity pool overlooking Elizabeth Quay, a spa with holistic treatments, a rooftop bar, a restaurant, as well as meeting and event spaces.

Established in 1983, The Ritz-Carlton is an independently operated division of Marriott International. Ritz-Carlton has hotels across the Americas, Middle East, Europe, Africa and Asia Pacific, with plans for expansion across these territories. Future locations include Nanjing, Rabat, and Mexico City.

Cover Image: Ritz-Carlton Perth is part of ‘The Towers’ project at Elizabeth Quay, a mixed-use riverfront precinct that seeks to be a destination that connects the city to the river. The precinct combines commercial, residential and hospitality uses, and provides a range of dining options for visitors. (Image: Cottee Parker)