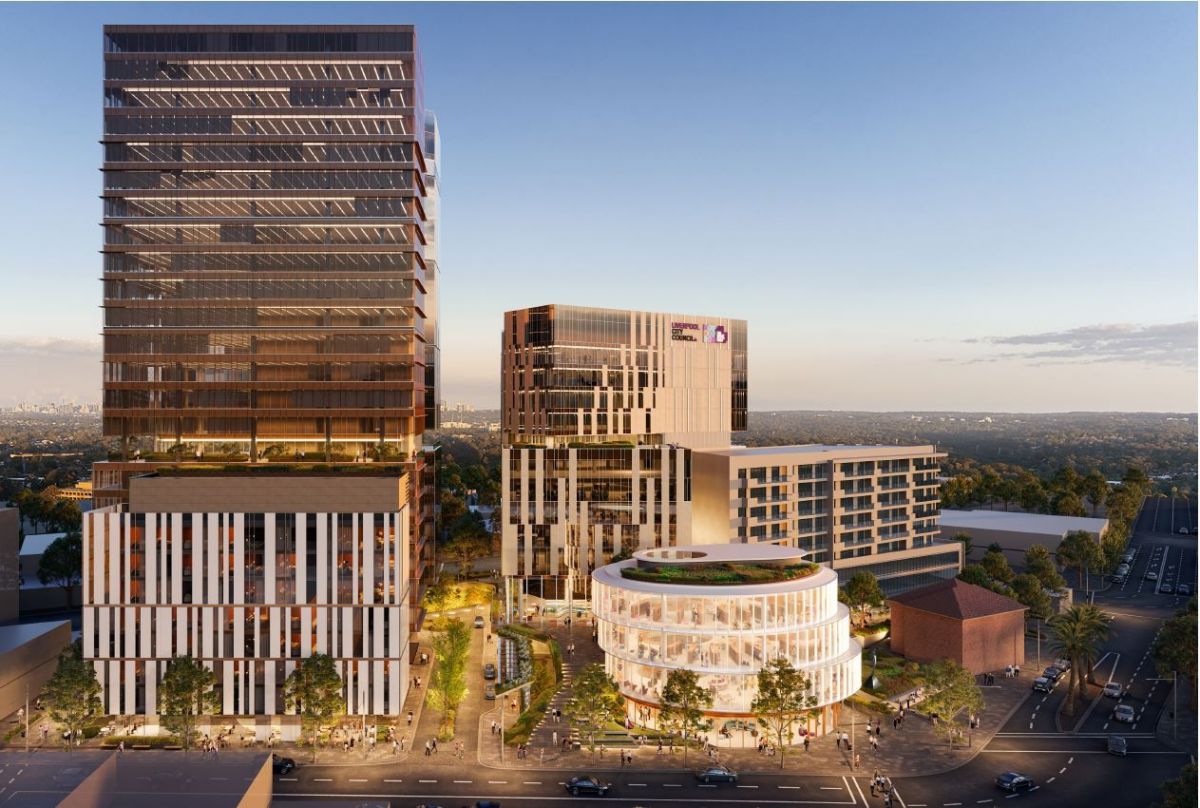 Located at 52 Scott Street, the project will comprise a new central Liverpool City Library and community hub, a childcare centre, University of Wollongong South Western Sydney campus space, a new Civic Plaza, commercial office space, retail space, a hotel and council offices. These will be housed within four main buildings and connected by plazas and pedestrian links throughout the 9300 sqm site. 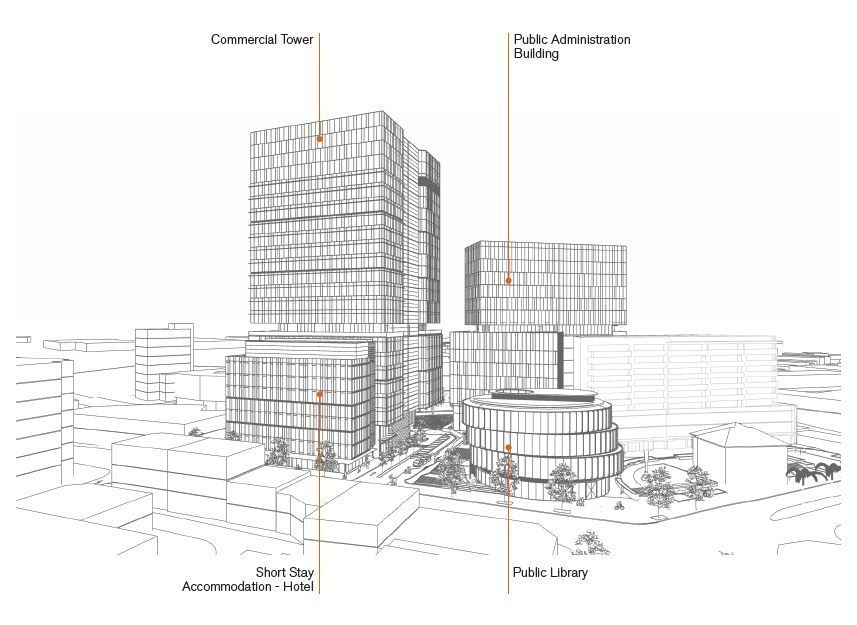 The 5000 sqm public library will provide a new focal point on the site and the revitalised Liverpool CBD. Situated at the junction of three streets, it will be highly identifiable. The lower proposed built form forms a transition between lower streetscapes and the new higher scale beyond. It also provides a human scale that complements the public realm, with the library’s curved geometry designed to enhance the pedestrian paths around the library. The highly transparent curved façade of the library connects the exterior and interior public spaces, allowing the abundance of activity to activate the site further.

The public administration building, housing council facilities, will face the library across the public space. The open spaces and landscaping allow for the potential for outdoor gatherings and events.

The mixed-use section on the southern end of the site will consist of the hotel and the campus commercial tower, with a pedestrian laneway in between these two buildings. Two-sided retail/food and beverage tenancies on either side of the hotel lobby on Scott Street will contribute to the activation of Scott Street.

The campus commercial tower will offer contemporary best practice workplace design. Floor spaces are designed to maximise views of the city centre to the north and over Georges River to the east and National Parks to the south. A double height entry lobby includes an integrated café setting overlooking the proposed pocket park on the George Street axis to the east. Together with the laneway adjacent to the hotel, and a sheltered walkway on Terminus Street, the tower also has its own share of greenery and pedestrian spaces.

The project aims to be the civic heart of Liverpool, with the combination of uses creating a focal point for activity in the city. The library is designed to be a distinct landmark while a multitude of open spaces provide the community with various types of public spaces. These allow for a range of activities, from casual interactions to organised public events in amphitheatre-style spaces. 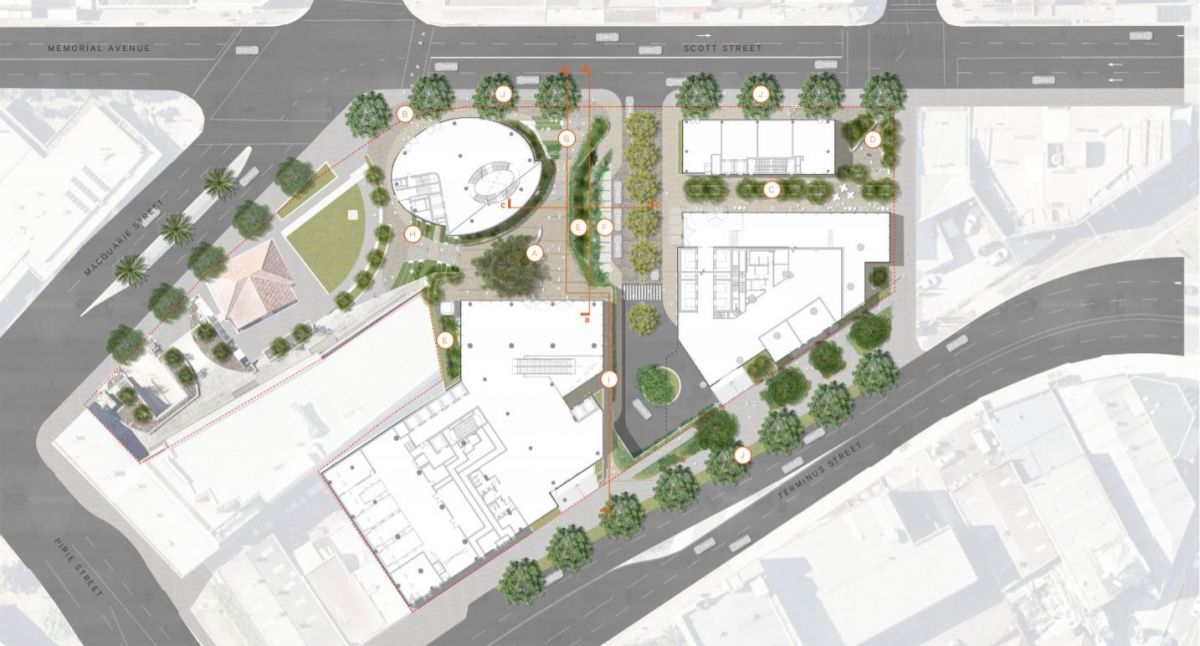 Image: The project proposes various public spaces: a civic plaza in front of the new Public Administration Building for public activities and to foster a stronger sense of identity and community (A); a library forecourt with a feature tree planting paying homage to Liverpool’s rural history (B); pedestrian laneway for pedestrian/cyclist permeability and outdoor dining and seating spaces (C); pocket park with outdoor dining and seating (D); sunken courtyards to provide a transition between indoor and outdoor spaces (E); porte-cochere for a sheltered drop-off to minimise disruption to Scott Street (F); landscaped amphitheatre connecting the Civic Plaza with the east entry (G); Augusta Cullen Plaza entry to Augusta Cullen Plaza with curving planter blends and a grassy amphitheatre (H); accessible path to Civic Plaza and providing a connection between Scott Street and Terminus Streets (I). (Image: fjmt studio)

Laneways and open spaces increase the permeability of the site and improve pedestrian access and experience across the site. The proposal seeks to activate a north-south pedestrian thoroughfare, as well as an east-west connection to the river. 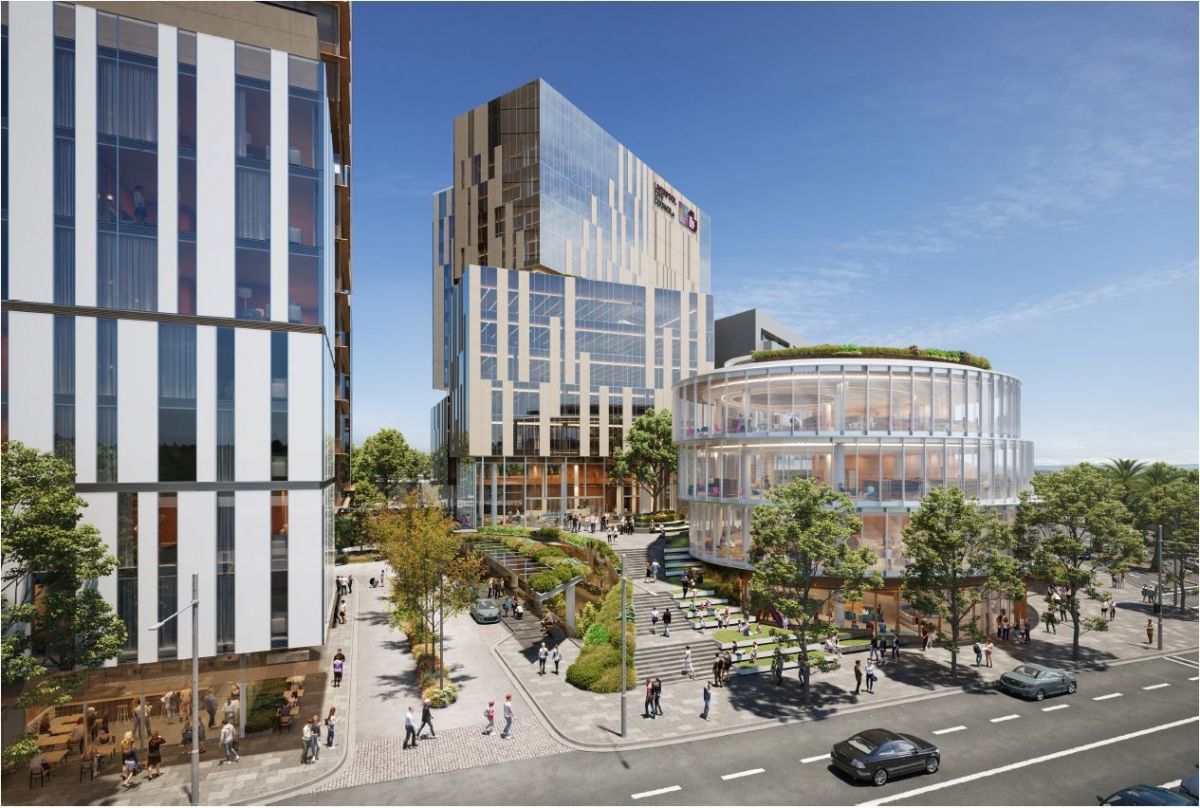 Image: The site is activated by its public spaces, from laneways to landscaped amphitheatre style spaces providing spaces for activity and enabling connections throughout the site. (Image: fjmt studio)

Rooftop terraces are also planned for the library and hotel, in addition to level 4 and level 7 terraces on the commercial building and the public administration building. These are designed to create “planted tapestries”, with “interwoven patterns of colour and texture” when viewed from the Public Administration and mixed-use offices above. These will incorporate a variety of species, with the planting forms complementing the geometry of the building and adding softness and colour to the built form. 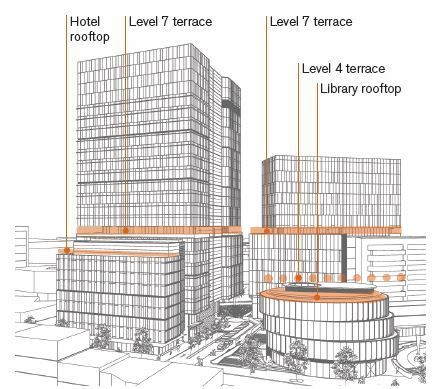 Regarding the project, Liverpool Mayor Wendy Waller said, “Liverpool Civic Place will anchor and activate the southern end of the Liverpool City Centre through a mix of uses, providing new public spaces, community facilities and job opportunities for our growing city.”

“Liverpool Civic Place is Council’s biggest-ever investment – in our future and our future community,” said Mayor Waller, explaining that Civic Place is one of several major developments in Liverpool’s $1b pipeline, which are “helping to transform Liverpool into Sydney’s third CBD.”

Costs will be jointly covered by Liverpool City Council ($195m for its offices and community components) and Built for the commercial elements.

Pending approval for the masterplan, construction is expected to be completed by January 2023, with commencement in early 2020.