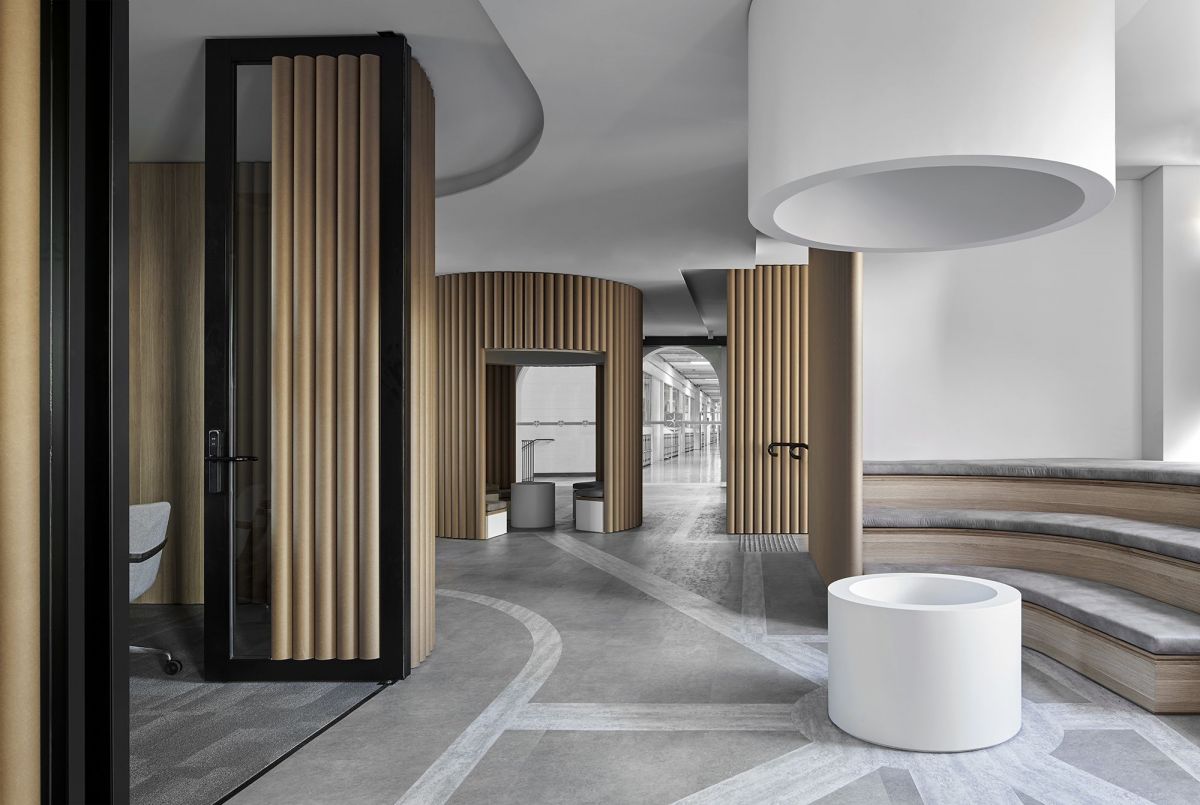 Branch Studio Architects explained that their objective was to create a space that reduces visual barriers between staff and student interactions, ensuring that students can feel comfortable meeting up with a staff member to have a chat.

This led to an approach of having a central public Piazza linked by two primary monuments – a Clock Tower and a Public Forum. The central public plaza serves as a destination and primary meeting point for staff and student interaction, as well as to address larger numbers of staff. 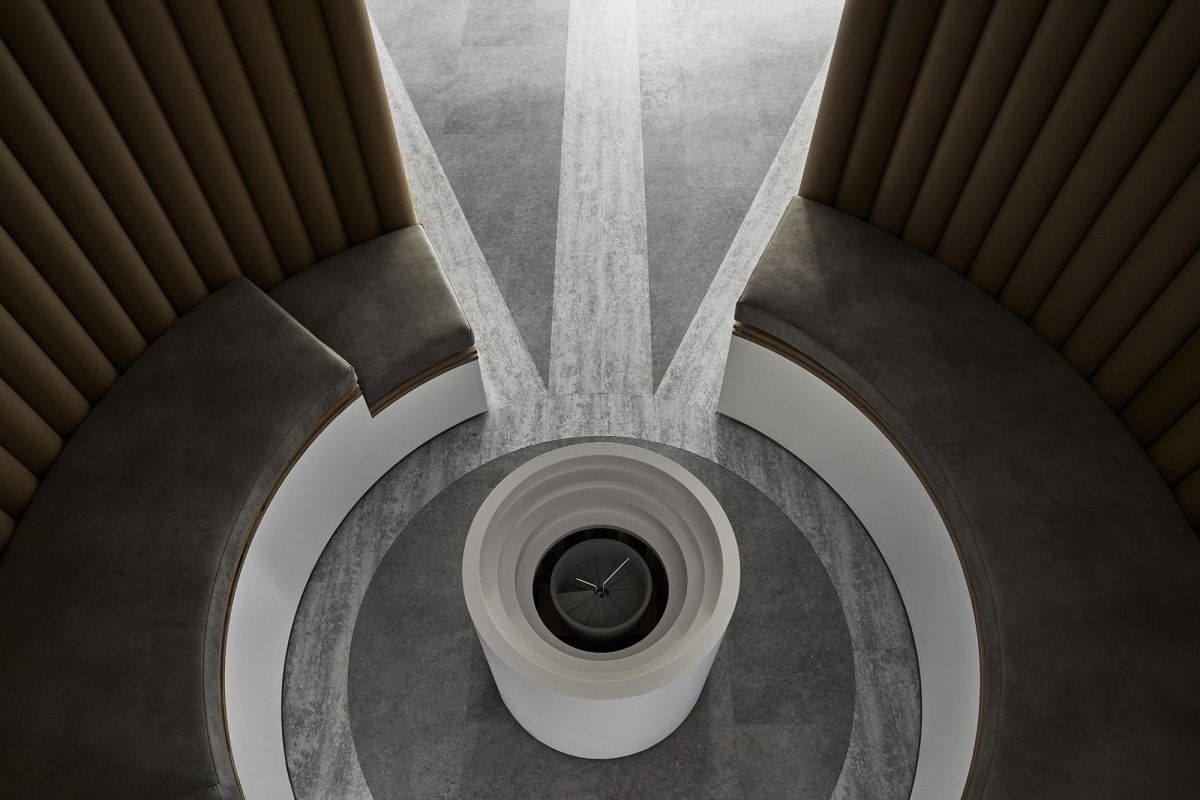 Image: The Clock Tower, one of two primary monuments in the Piazza, consists of a circular nook with a clock face embedded in a sculpture-like table at its core. (Image: Branch Studio Architects)

Cardboard tubes line the interior, both along the periphery walls and as partitions to create nooks for meetings and breakout areas. These cost-effective tubes, priced at $2.50 each, elegantly sculpt the space, creating a continuous visual curve and adding warmth to soften the interior. 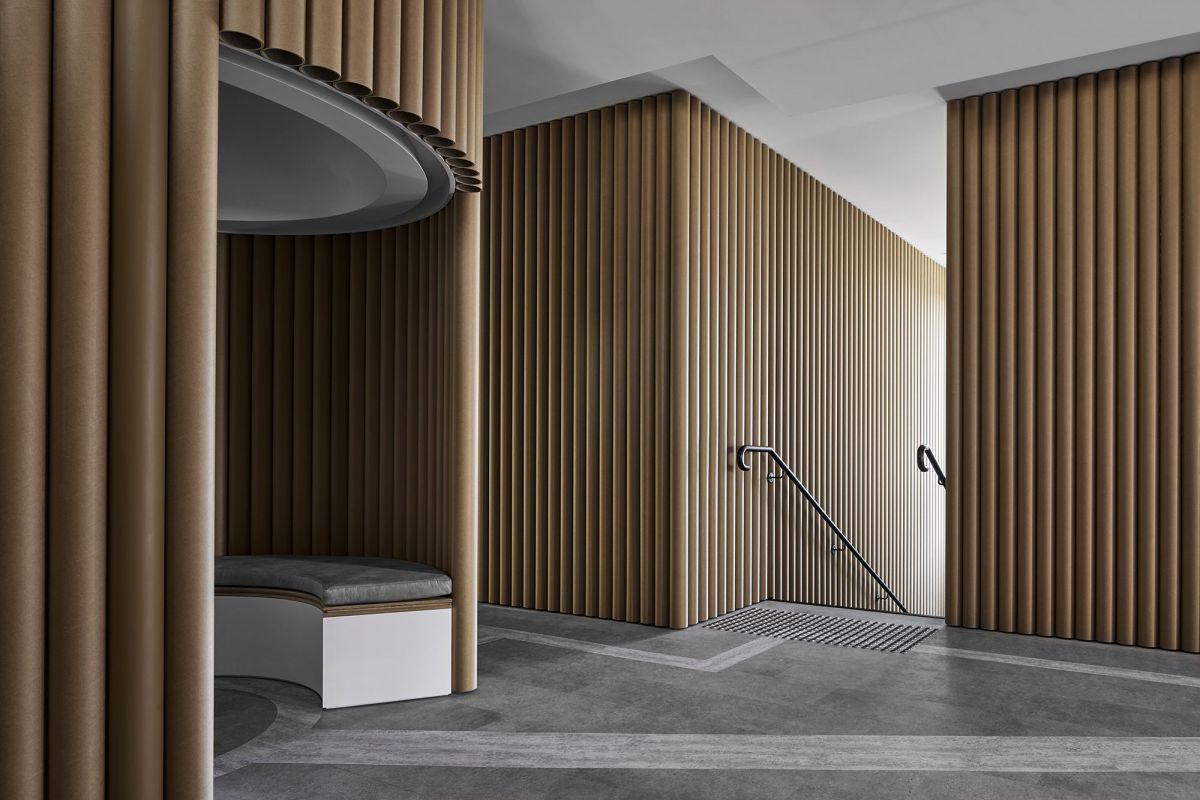 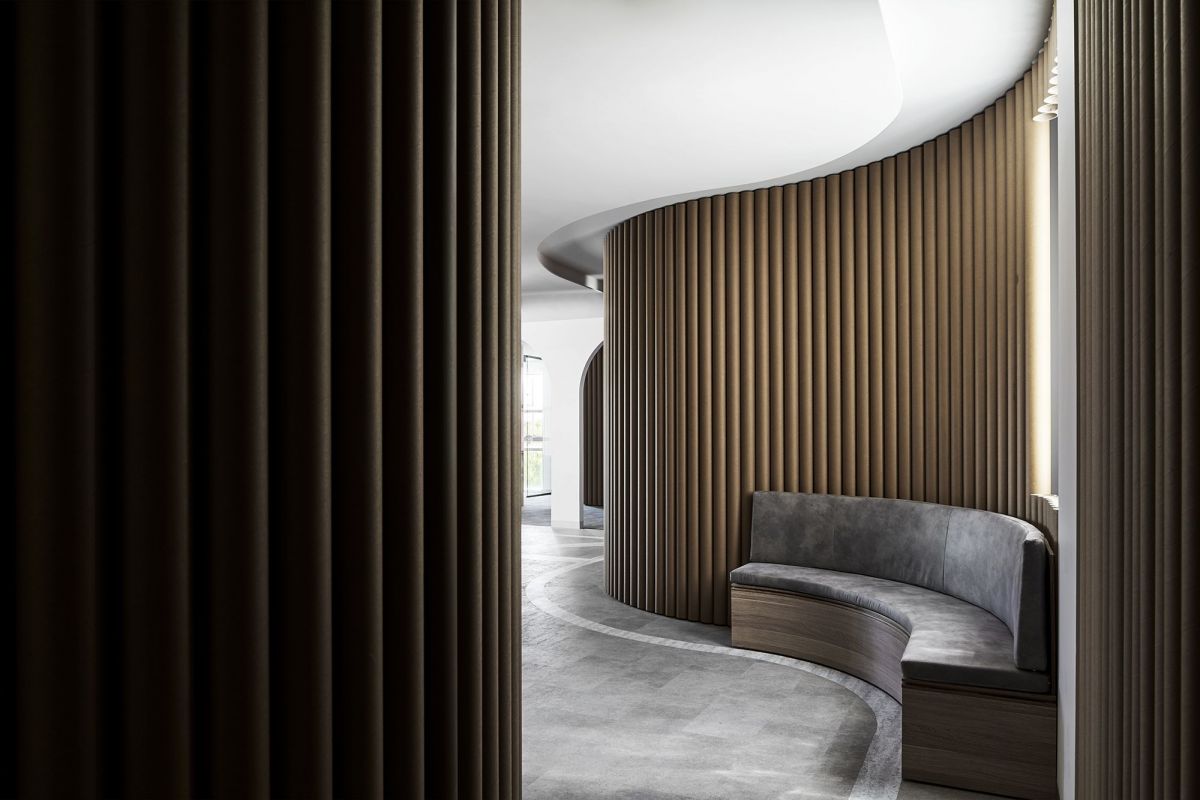 A profiled dropped ceiling extends the curvature of the interiors and adds another dimension to the curves. It also creates more intimate spaces at major meeting areas, through dome-like coffers in the Clock Tower and Public Forum.

In contrast with the curves occurring throughout the interior spaces, formal lines in the floor finish create visual axial links between the Clock Tower and Public Forum. These lines are also used to link entry, meeting and office spaces. 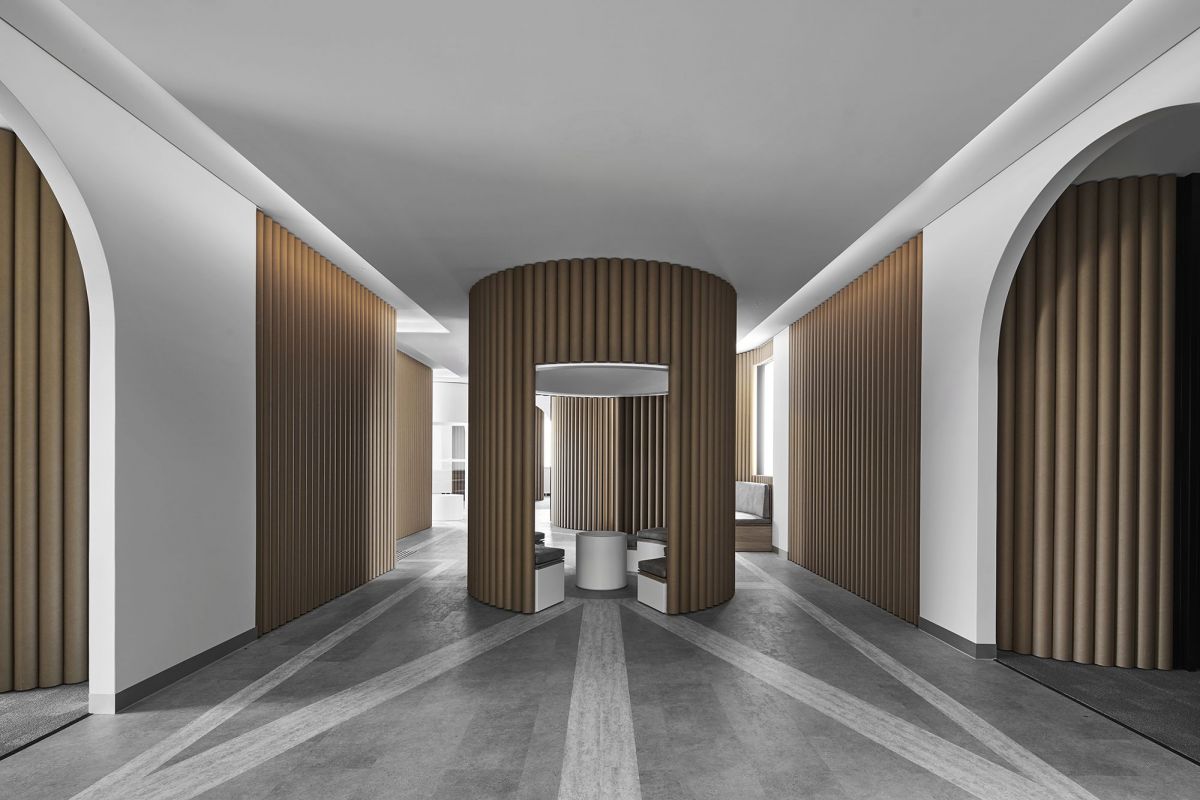 Branch Studio Architects explained that light is an important element of the project, with the careful control of light creating an extension of the internal formal curvature. The firm used light to add to the visual and contextual narrative, reflecting the subdued lighting cast underneath porticos and formal archways used in 18th century and neoclassical architecture. These complement the archways used as a formal entry into the space from an existing school corridor, as well as those archways used as entries into three office wings from the primary Piazza. 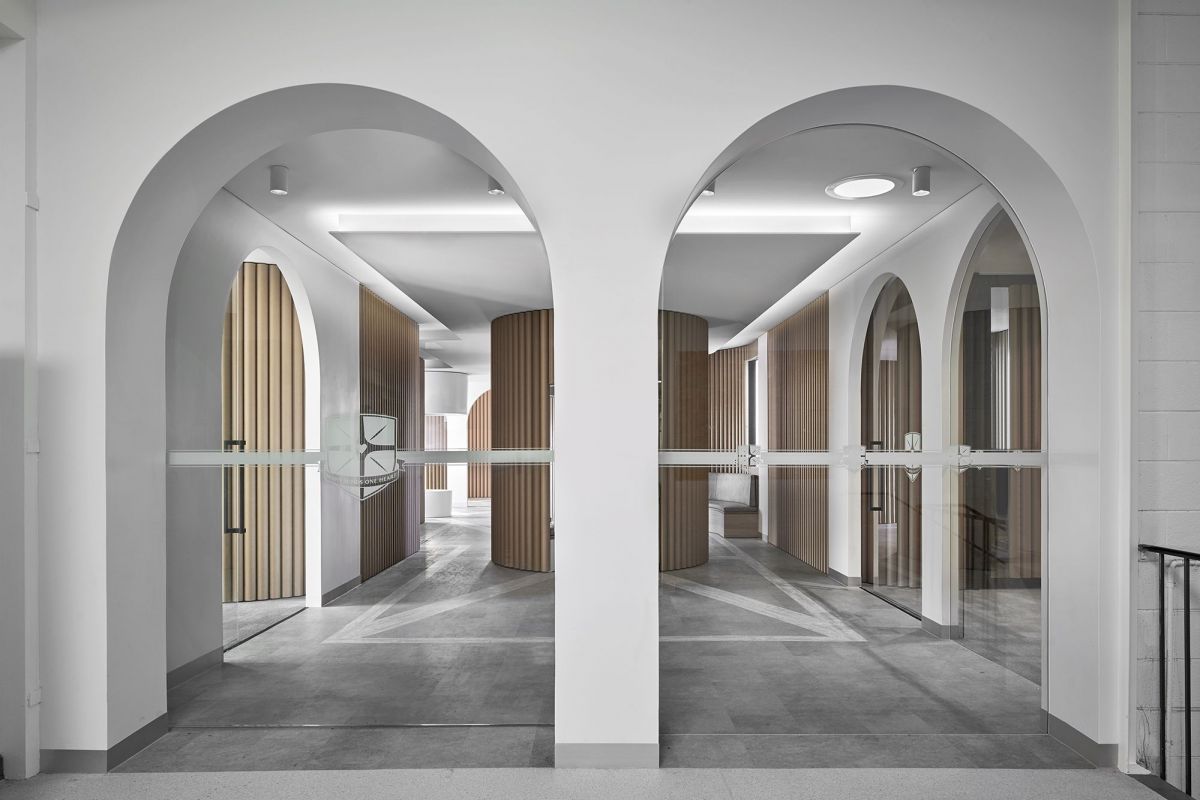 Image: Archways are used as entries into the space, as well as to office wings off the primary Piazza. (Image: Branch Studio Architects)

Regarding the project, the judges commented: “There is a great balance between contemporary, recyclable and affordable materials and colours, creating a warm and calming environment that is suitable for student welfare.”

Piazza Dell’Ufficio was one of five projects shortlisted for the Small Workplace Interior Category of the 2019 Dezeen Awards. The Dezeen Awards Interior Category had 53 shortlisted projects across 10 categories, with the winners of each category being announced recently. Piazza Dell’Ufficio will be in the running, along with the winners of the other 9 interiors categories, to be named overall interior project of the year. This will be announced at the Dezeen Awards 2019 party in London on the 30th of October.